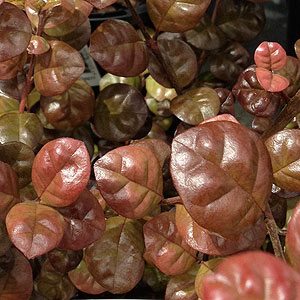 Used a screening plant or a medium sized hedge Lophomyrtus bullata with its blistered or crinkled purple foliage is originally from New Zealand.

Also known as ‘Bubble leaf’ and ‘Ramarama’, flowers in spring are small and white.

Evergreen and reasonably fast growing it will reach around 2 – 3m in height and takes well to pruning.

Copes well with coastal conditions and can also be grown in containers in a more formal style.

One named cultivar seems to stand out and that is Lophomyrtus bullata ‘Rainbow End’. Foliage is red with a tinge of green and yellow in variegation. Others include:

As many species and cultivars are very attractive plants many gardeners wonder why they are not available for sale. The issue is with disease. The plant carry Myrtle Rust which is a fungal disease.It seems that some cultivars are particularly susceptible.

In Tasmania a disease eradication program includes the cultivars Black Stallion, Red Dragon, Krinkly, and Rainbow’s End all on a watch list.

The disease is a problem that has prompted the call for landscapers and gardeners to stop using Lophomyrtus varieties. At this time we cannot recommend this plant.