Magnolia Grandiflora is the ‘Evergreen Magnolia’ and in its many varieties is the most prominent group of evergreen magnolias. Ranging from large specimen trees such as Magnolia St Mary’s, Magnolia Exmouth, to types suited to hedging or screening such as the small growing Magnolia ‘Little Gem’ which is the the most popular of this group.

New cultivars including Magnolia Kay Parris and Magnolia Teddy Bear are now on the market and these have slightly different foliage and flower forms.

Although these are all smaller growing cultivars, most Magnolia grandiflora can benefit from pruning.

Other evergreen Magnolias include the fast growing Magnolia Star Bright, an excellent screening plant with masses of flowers in spring. 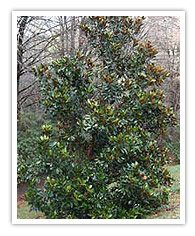 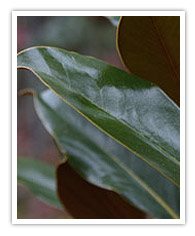 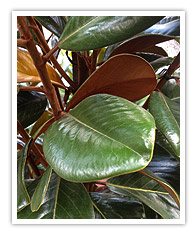 SORTING THROUGH THE EVERGREEN MAGNOLIAS

Evergreen Magnolias have been popular for many years, ‘Little Gem’ a small growing cultivar, perhaps being the variety that really made these trees popular.

Now we have not only Magnolia ‘Little Gem’, but also Magnolia ‘Kay Paris’ and the soon to be released Magnolia ‘Teddy Bear’. So we hear landscapers ask ‘what’s the difference?’

Magnolia grandiflora ‘Kay Parris’
‘Kay Parris’ Magnolia is now available in Australia, great foliage, a very long flowering season, tolerates cold a little more than most magnolias. The leaves are a nice green, extremely glossy, with with a deep orange on the underside. Smaller growing than ‘Little Gem’ perhaps to only 6-9m, again it makes a nice specimen tree as it has good structure and holds its shape well, ‘Kay Parris’ Magnolia could also be a fantastic screen. A faster growing tree than ‘Little Gem’

Magnolia ‘Teddy Bear’ is now available in Australia. Smaller growing than ‘Kay Paris’ and again fantastic foliage, but different to others in that the dark green leaves are rounded and cup shaped and quite densely held. Will still grow to 6m, however like both ‘Little Gem’ and ‘Kay Paris’ if pruned in winter it can easily be kept more compact. Large white flowers to almost 20cm.

FOR MAGNOLIA TREES FOR SALE CHECK OR PARTICIPATING MAGNOLIA NURSERIES

Magnolia Grandiflora ‘Exmouth’
Interesting variety due to its upright habit. More suited to street planting or as a large evergreen screen in rural settings. A compact form of Magnolia Exmouth is also available

Magnolia Grandiflora ‘Little Gem’
Very popular smaller evergreen magnolia form reaching 5-8m depending on conditions. Large white flowers, useful as a screening tree or as a specimen tree. Widely used. Glossy leaves, underside is a coppery velvet. Widely used as a foliage plant by florists due to the attractive foliage.

Magnolia Grandiflora ‘Teddy Bear’
Another new compact form of evergreen magnolia, fragrant white flower, the back of the glossy green leaves are heavily felted coppery velvet, and the leaves themselves are more rounded that ‘Kay Parris’ or ‘Little Gem’. Long flowering, dense foliage like other small forms can be cut back to form a hedge.

Port Wine Magnolia
Not actually a magnolia at all, its a related species ‘Michelia Figo’ See also Michelia Doltsopa.

The smaller growing cultivars include

The Larger types include