Although many deciduous Magnolias are smaller growing than their evergreen cousins they are widely used as feature trees. Over time some varieties will still grow into a large tree.

Flowering on bare stems in late winter, deciduous magnolias produce some of the best flowers for this time of the year some are small and delicate while others are large, as big as dinner plates.

Flower color varies from white from ‘Stellata’ and others through to the reds of cultivars such as‘Vulcan’ one of the best red flowering deciduous magnolias pictured right, and even deeper.

Many deciduous Magnolias available are old favourites such as Magnolia Stellata the ‘waterlily magnolia’ or ‘star magnolia’ it is native to Japan.

M. Denudta and M. soulangeana are well known, but what about some of the new cultivars now available. New deciduous varieties include Magnolia Felix, Royal Purple, Vulcan and Black Tulip are three new release deciduous Magnolias from Jury Magnolias in New Zealand. 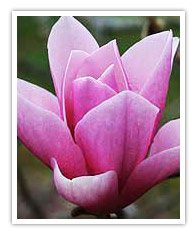 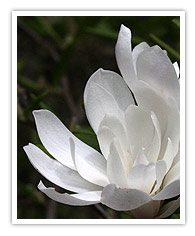 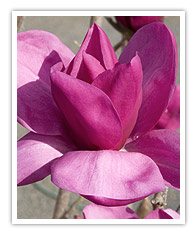 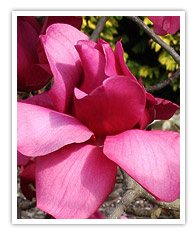 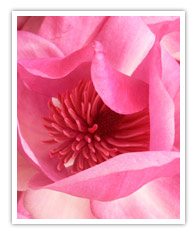 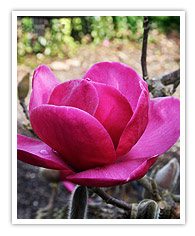 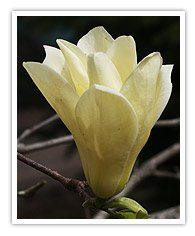 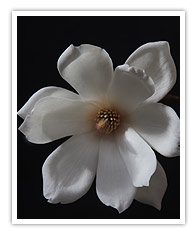 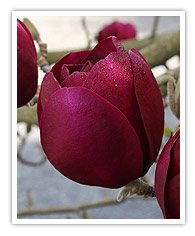 Magnolia ‘Felix’ produces stunning large flowers that have been measured to nearly 14 inches across. The fragrant flowers appear early in spring and Magnolia ‘Felix’ is a prolific flowering tree. Growing to 5-6m (15 – 20ft) if left alone, expect Magnolia Felix to grow at 60cm (24 inches) a year in ideal conditions but usually 30 cm (12 inches). Foliage following the flowers is a lighter green than many magnolias but quite large.

Magnolia Vulcan is another Jury release, a smaller growing deciduous tree to 15ft. Large ‘port wine’ coloured flowers and again a prolific flowering deciduous magnolia well worth a place as a feature tree in the garden.

Magnolia ‘Royal Purple’ is an interesting release, a more upright habit than many magnolias, brilliant purple flowers and well suited as a feature tree.

The real beauty is that these plants need little to no pruning at all. You might need to remove any dead or damaged wood from time to time. we have one very mature deciduous magnolia that needs to be pruned back every year or two.

The time to do this is in winter when you can see the structure. Go easy on them, the natural shape is usually the best.

Deciduous magnolias do not have a strong tendency to send up a strong leader, so can be pruned to shape. Low limbs can be left so that flowers are on show. Do not prune magnolias in early spring as the sap is flowing and this can cause bleeding, prune from early to mid summer.

These are plants that require a humus rich moist soil so dig in some well rotted compost before planting, amend heavy clay soils to provide good drainage. Although most will grow well in full sun, very hot conditions are not ideal.

Consider a little afternoon shade where possible, deep shade is not suitable. Once we get to tropical areas more sun is required.

A little slow to flower, be prepared to wait a year or two with new plants, however once established they produce masses of flowers, and in some years a second flush in late summer to autumn.

In general once established these plants are ‘problem free’ and very few pests or diseases. So with a little mulch each year to help retain a cool moist root run, a general purpose fertilizer in early spring, and perhaps a little extra water during dry summers you will have a wonderful flowering deciduous magnolia, just choose the size carefully, because some are very big and others rather small.